After the introduction of HyTrucks in the spring of 2020 and the announcement of the aim to have at least 1,000 trucks in the Netherlands, Belgium and West Germany driving on hydrogen by 2025, more and more parties have expressed interest in joining this initiative and working together on freight transport based on hydrogen. The initiative of Air Liquide and the Port of Rotterdam has now been expanded to include 60 parties in three countries and is being implemented in close collaboration with the ports of Rotterdam, Antwerp and Duisburg. It concerns hydrogen suppliers, truck manufacturers, refuelling station operators, forwarders and shippers. Other parties are still applying to join.

An important step towards zero-emissions transport

Along with electrification and other existing alternatives, clean hydrogen is needed in the energy mix to enable heavy road haulage to be emissions-free. With the developments in trucks and the network, it is possible to go long distances with a truck driving on hydrogen. This will make achieving the European climate goals and implementing and enforcing zero emissions in cities feasible. The transition to completely green hydrogen is an important precondition for this, which is being worked on jointly through policy and governmental support.

The transition to zero-emissions transport is one of the greatest tasks facing the transport sector. Along with the fact that Vos Logistics has been working intensively for years on reducing emissions, the sector as a whole will have to work on it too.  The application of hydrogen plays an important role, along with battery-electric. Given our experience with the use of LNG 12 years ago, we know that the implementation of an entirely new fuel like hydrogen is complex. Through this experience we have learned that we can only realise this ambition by collaborating intensively with all parties involved in the chain. That is our rationale for participating in HyTrucks.

HyTrucks is one of Europe’s largest projects aimed at developing hydrogen-powered trucks and the associated infrastructure. The project leads to improved air quality and a reduction in CO2 emissions of an estimated 100,000 tons, the equivalent of 110 million truck-kilometres.

No transport without network

Filling up with hydrogen is not actually new. From various places around the country, buses and cars, taxis and a few trucks already drive on hydrogen in the Netherlands. An important aspect for trucks is the speed with which refuelling a large quantity of hydrogen can be done. A truck uses a lot more than a car, and their drivers have tight delivery schedules. Trucks may not be always able to refuel at the same place, because they do not drive fixed routes from a central point.

A proper and sound hydrogen network is essential for the successful implementation of hydrogen in heavy road haulage for the above parties. HyTrucks has taken a number of crucial steps in this context to put hydrogen on the map, including 25 hydrogen refuelling stations along the most important transport corridors between the Netherlands, Belgium and the Ruhr region in Germany. This makes hydrogen a real, serious alternative for transporters. The European standardisation and collaboration with other international truck projects will enable implementation on a large scale and will not be restricted to the Netherlands, Belgium and Germany. 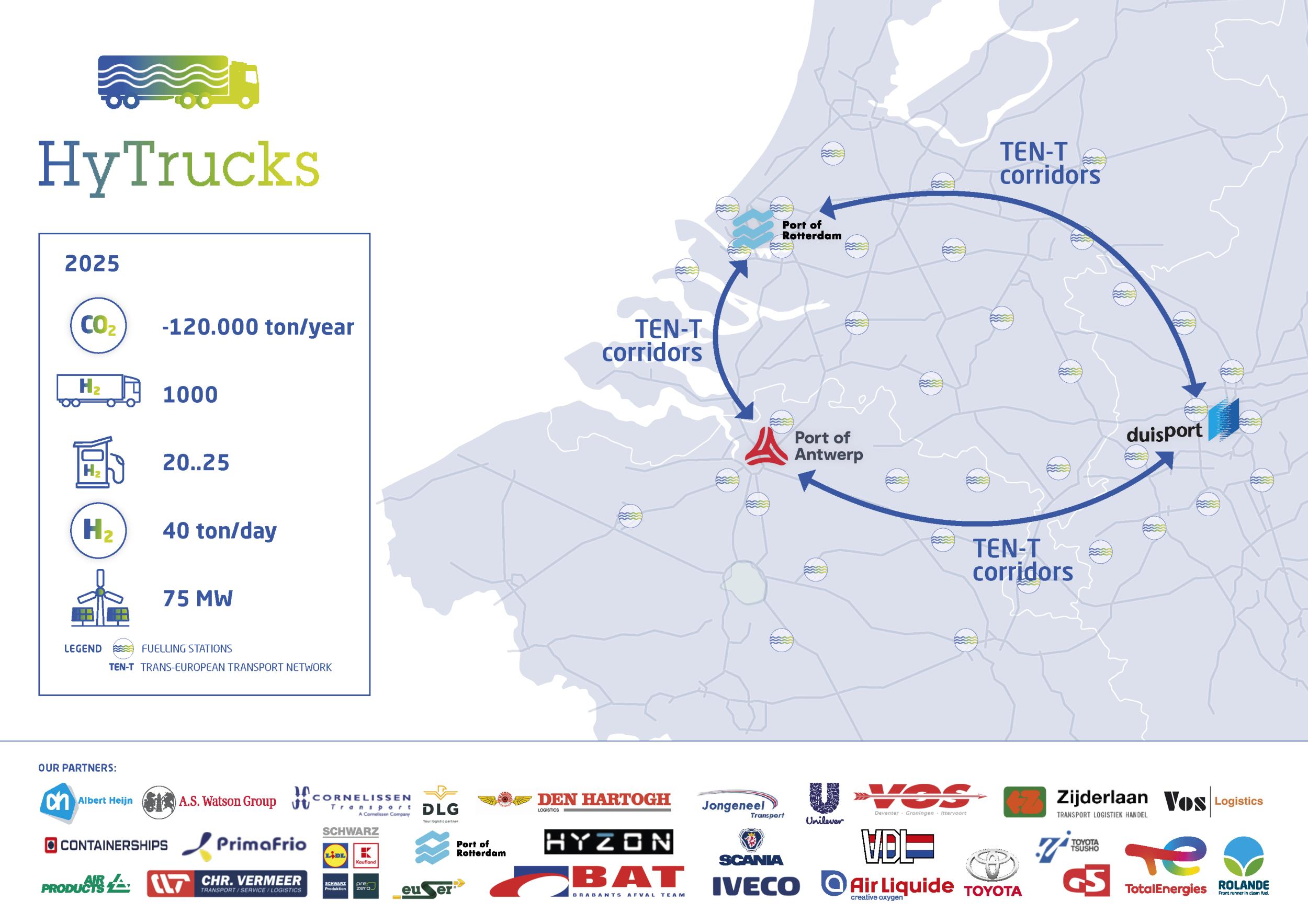 The demand for sustainable transport and the use of hydrogen is growing consistently, and it is expected that the first trucks driving on hydrogen in this project will be on the road in 2024. Large shippers like Albert Heijn have indicated that they want to take the first steps to realise this ambition. This company has already done a great deal in terms of electric driving and will continue to do so, but also sees advantages in trucks fuelled with hydrogen and will explore that option. Albert Heijn is not the only company that is actively looking at this.

Albert Heijn is determined to quickly take major steps towards Zero-Emissions transport. In the past few years we have intensively tested battery electric trucks because of this ambition. We are optimistic about the future of battery-electric transport, but at the same time we are determined to examine even more advanced technical possibilities. Now that there are feasible solutions for fuel cells based on green hydrogen, Albert Heijn is very interested in testing them in our intensive 24/7 distribution process. Hydrogen can be a good solution for this intensive transport.

It is thus highly likely that trucks will be driving on hydrogen more often in the coming years to supply shops and logistical centres of familiar brands.

To achieve HyTrucks’ objective of 1000 hydrogen trucks on the road in 2025, many companies are cooperating intensively, and business interests are being put aside in light of the climate goals. This is a unique form of cooperation that enables quick and sound upscaling. In Europe, this type of cooperation to realise the climate goals is applauded and supported. All ingredients to achieve the ambitious target are available. Together we can ensure its success.

Our participation in HyTrucks stems from corporate social responsibility, which we consider highly as a family business. For us, the use of green hydrogen as fuel for our trucks is the way to emission-free transport.

What does the HyTrucks project involve?

The partners of the HyTrucks project have a mission to decarbonise heavy road haulage in Europe through clean hydrogen. Their vision is that heavy road haulage must be made operationally and financially viable for transport companies through a focussed, large-scale kick-start project.

The partners of the HyTrucks project are therefore working on:

The result all parties are striving for by participating in this project:

That is what we are doing it for!